For this, I’ll be using the Ubuntu 20.04 live server ISO. Go ahead and download this ISO.

We’ll soon create another ISO with Autoinstallation configuration. We’ll end up mounting both of these ISOs in VirtualBox to create a VM.

We’ll need to install a couple of apt packages before we continue. Run:

cloud-image-utils 0.31.7 and virtualbox 6.1.16 were installed at the time of writing this.

cloud-image-utils will install a program named cloud-localds, which creates an ISO with autoinstall configuration. VirtualBox will be used to create VMs.

Before we can create an ISO, we’ll need to write the Autoinstallation configuration. This config file is a YAML file looking similar to:

The user-data key allows us to use cloud-init configuration. I’m using this to prevent having to set a password for a default user. Within the user-data, we’re creating the dustin user that may only login via SSH.

The network block is a little wonky and the duplicate network is intentional and required due to a bug. The network section matches the Netplan configuration. I’m using match.name: en* to prevent having to know the ethernet interface name in advance. This network configuration will set a static IP address of 192.168.0.137 for the server.

Note: replace the ssh_authorized_keys content with the content of your public SSH key. This will enable logging in via SSH once the VM is created.

To create an ISO with autoinstall configuration, navigate to the directory where the user-data file exists and run:

This will create an ISO at ./seed.iso. It’s common to see this file named seed, but not a requirement.

Open VirtualBox and click “New” to create a new VM.

I named mine ubuntu and allocated 4GB of RAM. I left the defaults and clicked through the wizard.

Once the VM is created, click “Settings” on the new VM. Under “System -> Processor,” I provided 4 CPUs. This isn’t required but helps speed up the process.

Next, navigate to “Network -> Adapter 1”. Change “Attached to” from “NAT” to “Bridged Adapter” and leave the default values. This will make it easier to SSH into the VM later without having to configure any port forwarding.

Finally, go to “Storage.” To the right of “Controller: IDE,” add an optical drive. Set the new optical drive to “IDE Primary Master” and select the Ubuntu 20.04 live-server ISO. 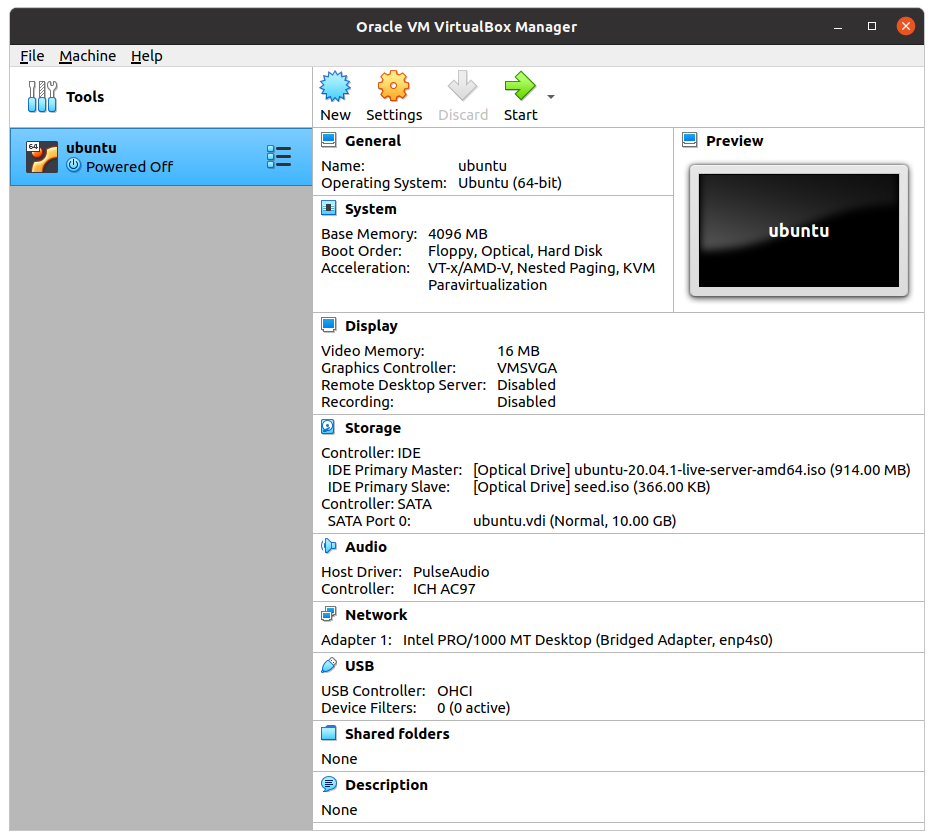 Now, start the virtual machine that was created previously.

The virtual machine will boot and validate the Autoinstallation configuration. Soon a prompt stating:

Now wait until Ubuntu 20.04 is installed and the VM reboots.

We’ll then be able to run:

Autoinstallation is a great way to automate most of installing Ubuntu servers in a non-cloud environment.